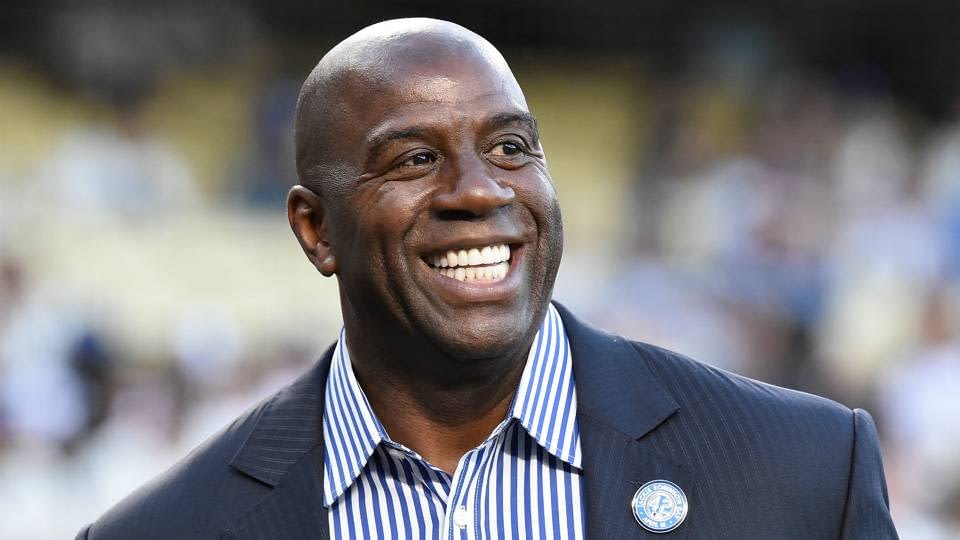 ​Earvin “Magic” Johnson is the Chairman and Chief Executive Officer of Magic Johnson Enterprises, an investment conglomerate valued at an estimated $1 billion dollars. Since retiring from the NBA over 20 years ago, the legendary basketball star has morphed into a business powerhouse who has dedicated his life to leaving a positive impact in underserved urban communities. Having left the basketball court for the boardroom, Johnson parlayed the skills and tenacity he acquired on the court into a winning formula for his successful business ventures. With his continued love of basketball, Johnson is utilizing those same skills and winning spirit in his role as the President of Basketball Operations for the Los Angeles Lakers, working closely with ownership throughout all areas of the franchise.

For the last two decades, Johnson has consistently turned heads with his unprecedented partnerships. In his early years as an entrepreneur, he forged an alliance with Sony Pictures to develop Magic Johnson Theatres. In 1998, he teamed with Starbucks to become the only franchisee in the history of the company, acquiring and eventually selling 125 stores in a lucrative move which further solidified his position in the business world. Both ventures served as catalysts for redevelopment in urban communities, and are widely recognized as the corporate blueprint for engagement and success with urban consumers across America.

Still a commanding presence in the sports world, he made history in 2012 when he became co-owner of the Los Angeles Dodgers, a Major League Baseball franchise that was purchased for an astronomical $2 billion dollars. It was the highest purchase price for any professional sports team at the time. He also co-owns the Los Angeles Sparks of the WNBA and Major League Soccer’s Los Angeles Football Club.

Johnson continues to expand his influence through a number of other investments. He currently has controlling interests in EquiTrust, a $17 billion financial services company, ASPiRE, an African-American television network, and SodexoMAGIC, food service, and facilities management company.

The Lansing native is constantly evolving and remaining relevant in a dynamic digital age by broadening his scope into infrastructure and technology. Through a newly formed fund, Johnson is investing millions of dollars in infrastructure improvement in the United States. Operating under the philosophy that true success is making others successful, he is one of the leading investors in a number of minority-owned tech companies that include Unchartered Play, a company dedicated to producing clean power energy-generating play products; ShotTracker, a company that makes wearable technology for basketball players that helps track player and ball movement; Jopwell, a diversity and hiring recruiting platform; Walker & Co Brands, a company that develops health and beauty products for people of color; and MiTú, the Latino-fueled media brand and digital network that connects thousands of Latin content creators with viewers around the world. He is deliberate in his investment strategy to bring a positive impact to the community.

Johnson proudly serves as Chairman and Founder of the Magic Johnson Foundation, who has awarded over $21 million in grants – cash and technology hardware/software – and made a positive impact in the lives of over 500K individuals through various programs and social efforts. The Taylor Michaels Scholarship Program has graduated over 435 students, the HIV/AIDS initiatives have tested over 40K individuals, and 15 Community Empowerment Centers have provided technology access to over 260K individuals. Remaining true to his humble Lansing beginnings, he is unwaveringly dedicated to working with major corporations and partners to bring jobs and high-quality products and services to underserved communities.